This page describes functions that can be used in conjunction with Agents.jl to animate and interact with agent based models.

The animation at the start of this page was done by running the examples/daisyworld.jl file, and see also an example application in Agents.jl docs.

Plot an agent based model by plotting each individual agent as a marker and using the agent's position field as its location on the plot. Requires Agents.

Return the overarching fig object, as well as a struct abmstepper that can be used to interactively animate the evolution of the ABM and combine it with other subplots. The figure is not displayed by default, you need to either return fig as a last statement in your functions or simply call display(fig). Notice that models with DiscreteSpace are plotted starting from 0 to n, with n the space size along each dimension.

To progress the ABM plot n steps simply do:

You can still call this function with n=0 to update the plot for a new model, without doing any stepping. From fig you can obtain the plotted axis (to e.g. turn off ticks, etc.) using ax = content(fig[1, 1]). See Sugarscape for an example of using abmstepper to make an animation of evolving the ABM and a heatmap in parallel with only a few lines of code.

Launch an interactive application that plots an agent based model and can animate its evolution in real time. Requires Agents.

The agents are plotted exactly like in abm_plot, while the two functions agent_step!, model_step! decide how the model will evolve, as in the standard approach of Agents.jl and its step! function.

The application has three buttons:

Two sliders control the animation speed: "spu" decides how many model steps should be done before the plot is updated, and "sleep" the sleep() time between updates.

This function exports the animated time evolution of an agent based model into a video saved at given path file, by recording the behavior of abm_play (without sliders). The plotting is identical as in abm_plot and applicable keywords are propagated.

Open an interactive application for exploring an agent based model and the impact of changing parameters on the time evolution. Requires Agents.

The application evolves an ABM interactively and plots its evolution, while allowing changing any of the model parameters interactively and also showing the evolution of collected data over time (if any are asked for, see below). The agent based model is plotted and animated exactly as in abm_play, and the arguments model, agent_step!, model_step! are propagated there as-is.

Calling abm_data_exploration returns: fig, agent_df, model_df. So you can save the figure, but you can also access the collected data (if any).

Besides the basic time evolution interaction of abm_play, additional functionality here allows changing model parameters in real time, based on the provided fourth argument params. This is a dictionary which decides which parameters of the model will be configurable from the interactive application. Each entry of params is a pair of Symbol to an AbstractVector, and provides a range of possible values for the parameter named after the given symbol (see example online). Changing a value in the parameter slides is only updated into the actual model when pressing the "update" button.

The "reset" button resets the model to its original agent and space state but it updates it to the currently selected parameter values. A red vertical line is displayed in the data plots when resetting, for visual guidance.

It is possible to inspect agents at a given position by hovering the mouse cursor over the scatter points in the agent plot. A tooltip will appear which by default provides the name of the agent type, its id, pos, and all other fieldnames together with their current values. This is especially useful for interactive exploration of micro data on the agent level.

For this functionality, we draw on the powerful features of Makie's DataInspector.

The tooltip can be customized both with regards to its content and its style by extending a single function and creating a specialized method for a given A<:AbstractAgent.

Convert agent data into a string which is used to display all agent variables and their values in the tooltip on mouse hover. Concatenates strings if there are multiple agents at one position.

Custom tooltips for agents can be implemented by adding a specialised method for agent2string.

Tracking model variables is already made easy by adding them to the adata/mdata vectors. 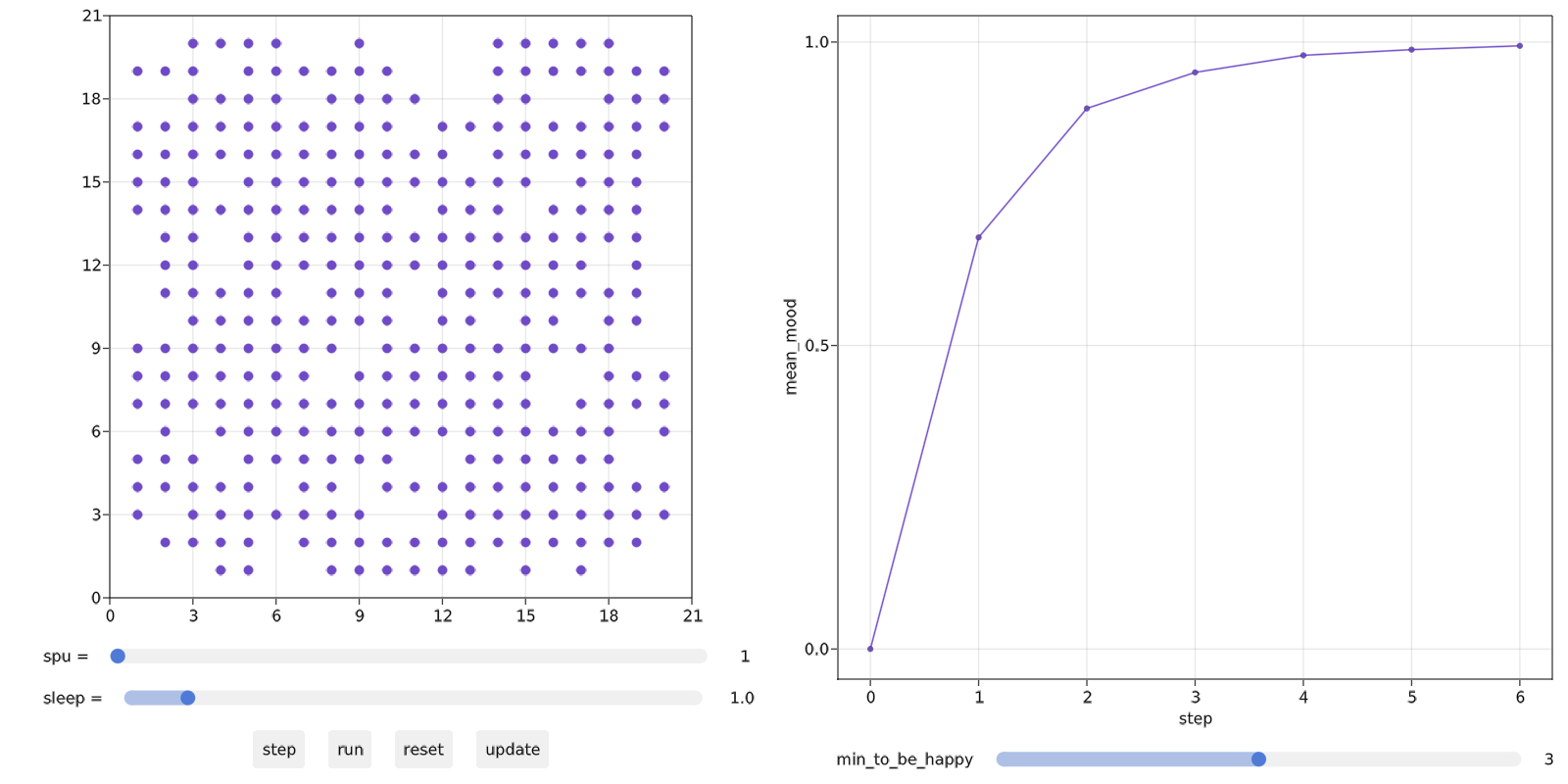 This will always display the data as scatterpoints connected with lines. In cases where more granular control over the displayed plots is needed, we need to take a few extra steps. Makie plots have to know which changes in the underlying data to watch. This is done by using Observables. We can simply add the variable in question as an Observable and update it after each simulation step. This can be done by adding a new stepping function which wraps the original model_step! function and the updating of the Observable's value.

For the sake of a simple example, let's assume we want to add a barplot showing the current amount of happy and unhappy agents in our Schelling segregation model.

This document was generated with Documenter.jl on Tuesday 18 January 2022. Using Julia version 1.7.1.